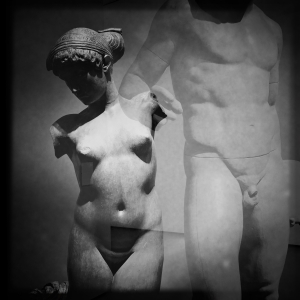 It goes like this: Last year I was 50, there…. I said it. Years ago as I may have mentioned elsewhere I used take some reflective time and do a self-portrait on my birthday. I had dozens of them from 17 to early 30’s. Then I got distracted and forgot how to draw. So, last year I though rather than doing a picture, and as it was ‘big one’ I’d do something a little more profound.

My wife & and I went a away for a weekend and ended up in Winchester where I went to art school. We also took a trip to Stonehenge and it was around then I was finishing what ended up as the NueChromeWave set of songs. So it occurred to make a kind of abstract musical biography, something that used events, people, places, influences and anything else to hand to mark each of my previous five decades from 1964 until 2014. Thats what the the Glove Of Bones was intended to be, five fingers to the world. In the end that became a broader name for the personality driving the hearse and the song set became 50/50, an homage to chance and small nod to a Frank Zappa song.

Well, a year on I managed to complete 50/50 and a book of images and clues to go with it, plus a 50min film with is here – the sound track of which was released on digitalDIZZY (which made me very happy) and following that I’ve started (and almost completed) what can loosely by described as a ‘dub’ album of new songs. Whilst originally this site was just intended to host the 50/50 project, its come alive as useful place to keep the idea alive – some odd thread seems to pass through it all in one way on another.

I’m not entirely sure whats next, certainly more films for the 50/50 songs, my a vinyl record of some new music, could be punk, could be dubstep, could be dark ambient. Definitely more still images, maybe even some rule breaking colour.

Playing below are the first four complete pieces in the Glove of Dub. They take their titles from a trip to Tintagel, Halloween and some rather poetic 16th century terms for …….sex and body parts. More to follow.