We were hugely gratified to receive a review for the Kafou project in the Monolith Cocktail round up of July 27th. The author has plainly done the research and has written up the concept with greater clarity than your current scribe.

Sharing the commentary below, the review is linked HERE

“Reimaging a time when Earth’s landmasses were being reshaped, the atavistic geological inspired futurist dub unit pose a cultural “what if?” with their fourth “set”, Kafou In Avalonia. Developing out of a volcanic arc at the northern edges of the “supercontinent” Gondwana (we’re talking about 550 million years ago; when this leviathan contained one-fifth of all the planet’s land) but decoupling to form a drifting micro continent of its own, Avalonia, if it didn’t eventually breakup and collide with Pangea, would have bridged what is now the Atlantic Ocean. Crustal fragments underlie parts of Southwest England, Southern Ireland and the East Coast of America. Wishful dreaming Cousin Silas And The Glove Of Bones picture an alternative reality; one in which Avalonia still existed as a gateway between all Earth’s cultures and peoples. It acts as the crossroads that might have set out an entirely different course for civilization; a more integrated, less fractious one perhaps. In this setting Haitian, Brazilian, Angolan and Nigerian deities, spirits and rituals converge with an experimental soundtrack of post-punk dub, Kosmische and electronica.

A reference heavy album, with various “Loa” (spirits) and divinities summoned and made offerings, the track titles name check a pantheon of the worshipped. The opening gabbling dub and primordial shrouded ethereal jug-poured ‘Oxûm Over Water’ pays homage to the Yoruba peoples river goddess, while the singing chorus and insect chirped trans-Europa rail momentum Kraftwerk meets Guru Guru ‘Oxalá Of The White Sky’ takes its name from the Brazilian “sky father” and creator of human beings. Elsewhere, Haiti’s spiritual ancestors are represented in the shape of the serpent creator of the cosmos, Damballa (the On-U-Sound dub prowling low frequency crumbled bass languorous ‘Damballah Of The Dark Sky’), and senior Petro visitation born from the heinous savagery and injustice of slavery, Ezilí Dantor (the lolloping Orb submersion ‘Ezilí Dantor Awake’). Incidentally, that last spirit especially took kindly too offerings of crème de cacao and jewelry, and on its birthday, a wild pig. It’s believed that one such feast in honor to Dantor preceded the infamous slave revolt of 1791.

Ancestral ghosts meet synthesized futurism on this mystical transformed aural geography, as recordings of various rituals swirl in and around a cosmic soup. A supernatural and celestial, seeping and vaporous vortex of polygenesis sources are gathered together to create an imaginative cosmology hybrid. If The Future Sound Of London and Ash Ra Tempel recorded an album at Lee Scratch Perry’s black ark studio it might very well have sounded something like this. And that’s me saying this is a bloody great experimental dub album. Seek out now.”

Thank you to the reviewer Dominic Valvona for the really kind words above. We are so pleased you enjoyed it. We highly recommend that you sign up for this wonderful publication on follow their social media.

There is only one of each of cassette and the ‘gris-gris’ bags variants still available. It’s been a wonderful thing to see these shipped around the world, completing the imagined journey across Avalonia.

The final additions to the Gris-gris edition were these little fellows, one left seeking a home. 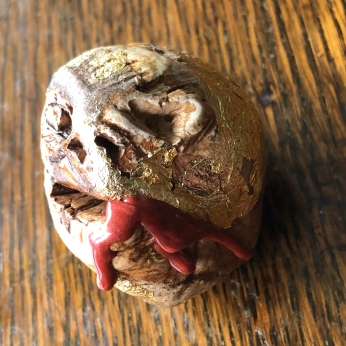